Blood on His Hands by Mark P. Sadler a book review

Posted by willbutler37 on March 8, 2011 in Blood on His hands, Book review, Mark Sadler, thriller and suspense, William Butler 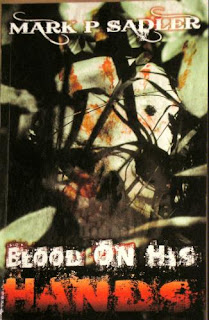 A crime of passion set to the background of dust and revenge.  Mark Sadler weaves his story of betrayal with a pace of desperate anticipation.  Michael the husband works hard for the money as he takes care of his wife, Bonnie, and two boys, Seth and Caleb.  The money pays well and he does his best to take care of his family.  Mike would do anything for Bonnie and the boys—even go to counseling with Bonnie so he could keep the flames of his marriage alive. Mike leaves for a weeklong job, which angers Bonnie, but she seems to take it well for when he’s gone she gets with her sister and plans a night out with the girls.
Enter Ian…the private dick…new love interest for Bonnie, who doesn’t waste any time at all leading Ian into her clutches.  Their relationship moves fast and the two begin to move in together. As they have sex for what seems like the first time…Mike comes home.  Mike’s back early due to a damaged machine at his job.  When he pulls up to the trailer, he doesn’t see Bonnie’s car, but someone else’s (Ian’s) and proceeds to believe he is being robbed.  Mike grabs his gun and enters the house through a hatch he made that came up into the bedroom from under the trailer.  You can guess what happens from here, which has Mike on the run from the law.  But the law is the least of Mike’s worries, as there is someone who wants him to pay for what he had done and is going to stop at nothing to make sure payback is served.
The story has its moments and is well paced, though there are moments to where the character’s are detached and you wish to know more of their inner motivations.   The sex scene was detached as well.  I felt as though they were not really into each other—I didn’t feel their passion.  But that’s me. Overall, I think the character’s were just existing and not experiencing their surroundings.  The tensions between the characters were none existent as well.  Tension is conflict…I didn’t feel it.
But please don’t get me wrong…Blood on His Hands is a great story and is a good read.  It is worth being on anyone’s bookshelf.  And for a debut novel, it’s definitely a good start.  I’m going to be looking for more from this author.
You can get this book on Amazon in paperback as well for the kindle.